This article is about the impact of foreign direct investment on developing economies
and the environment. All of us that are concerned about the environment should
ask ourselves if the increase in capital mobility associated with the world-wide process
of  liberalization, deregulation and privatization, known as the Neo-liberal global
regime, has contributed to the problems of higher emissions, ozone layer destruction,
and pollution of water sources, as well as to create false economic bubbles that lead
to increased consumption in these regions whilst forcing the destruction of the
environment by the poor in order to survive and cope with the roles their society
demands. Neo-liberal practices such as those enforced in developing countries like
Colombia, while seeking to attract foreign investment to push their economies, tend to
generate a false aggregated demand growth that in most cases is not sustainable in the
long term, increases global unemployment, unleash destructive competitive processes
and weaken government’s ability to regulate business in the citizens` best interests.

Download data is not yet available.
Abstract 646 | PDF Downloads 2855 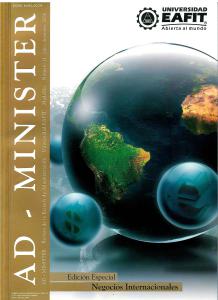